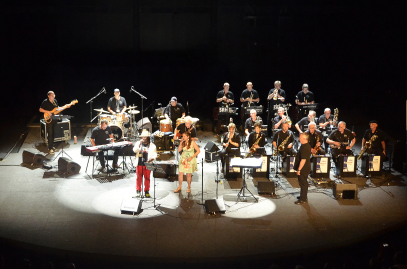 The SRH Big Band was founded in Heidelberg in 2002 by Rainer Maertens - the current bandleader - and employees of the SRH Group who are interested in music.
In the SRH (www.srh.de) - a country wide offerer within the range, education, rehablitation and health service, approx. 13,000 coworkers work in the different enterprises, at different locations of Germany.
The main place and seat of the getting thing is in Heidelberg. Here also the SRH Bigband rehearses.
The SRH-Bigband is virtually the "musical company team of the SRH". The band is made up of jazz enthusiasts from all sectors of SRH, semi-professional musicians, jazz professionals and music students.
For us SRH means: S wings R eally H ot ...
The band has travelled a long way in the past, with appearances at jazz festivals, open air, clubs, city festivals, company parties and balls, and has been on the road throughout Germany, as well as in France, Spain, the Czech Republic, Hungary and the USA.
She represents the great orchestral jazz in the classical line-up with 5 saxophones, 4 trombones, 5 trumpets, a rhythm set consisting of piano, bass, drums, percussion as well as singer and singer.
Regular rehearsals and workshops, led by renowned jazz musicians, guarantee that the band now moves at a very high musical level.
A few years ago the band produced a highly acclaimed CD - "Good News" - and since then the SRH Bigband has continued to develop.
This was one of the reasons why the SRH big band was voted the best big band of this festival at the 7th big band festival in Szombathely, Hungary.
In November 2018 the SRH Bigband was a participant in the nationwide competition for orchestras in Trossingen and achieved a 2nd place in the category Bigband with the rating: With very good success.
Every year we develop a new program in the SRH Bigband consisting of swing, funk, latin, fusion and soul and go beyond musical pigeonholing, without being afraid of something new.
The SRH Bigband - S wings R eally H ot!
More information under:
www.srh-bigband.de